We are very pleased and very happy to announce that Lottie, 24 years old, is the happy mum of a beautiful daughter, born yesterday afternoon! Lottie and her daughter are doing well!

Lottie was released almost 5 years ago with her first son Andrew, born in 2000 at the CCC. Andrew left the released group in November 2008 and was seen in July 2009 with 2 other released chimpanzees.

Lottie got a second son, Jackson (on the photo, taken in September 2011) in November 2009. Jackson sadly disappeared at the beginning of 2012.

Lottie is a wonderful mum and her daughter is a new addition to the released group’s “nursery”, as there are now 3 babies with Niamankoro, Mama’s daughter and Dinié, Nanou’s first son. Lola, released 2 years ago, is also pregnant! Her first daughter, Siala, who was born 5 years ago at the sanctuary, will be for sure a great sister!

So much happiness for the released chimps! 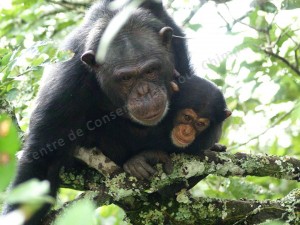