Lissa Ongman is a local Seattleite who started working with the Centre de Conservation pour Chimpanze (CCC) in 2003.  Since her first trip to Guinea she has ventured back on three separate occasions, including helping with the release of 12 chimpanzees into the national park in 2008.   Lissa also worked with captive chimpanzees at the Wildlife Waystation in California where she created an enrichment program for approximately 100 primates, including 54 chimpanzees.  In 2008, after her third trip to Guinea, Lissa took a job with the Max Planck Institute in Ivory Coast tracking wild chimpanzees.  Later her two main research individuals, an orphan and the adult male who adopted him, would become the stars of the Disney movie, “Chimpanzee”.  Her latest trip to the CCC was in the spring of 2012 where she recorded data on the successful rehabilitation process at the CCC for her thesis with Dr. Humle at the University of Kent, UK.

Lissa is now back home in Seattle but stays involved with the CCC by supporting Project Primate Inc, raising funds and awareness of the plight of the chimpanzee and other great apes.

So if you are not far from Seattle, come and enjoy Chaco Canyon’s Tuesday night drink specials and come hear Lissa telling you stories about her amazing experiences: “Recreating family: Stories from the African bush about orphaned chimpanzees and their caretakers” on June 4th at 7pm at Chaco Canyon (West Seattle)! 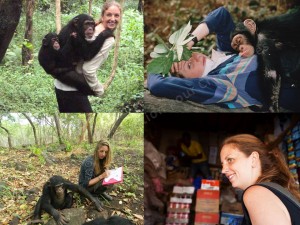