Habou is a young male of about 10 years old. He is the lowest ranking of the teenager’s group. At the beginning of December, a growth appeared on the side of his nose. It was growing fast. We have started an antibiotic treatment on suspicion of a dental abscess. The growth has gone down a lot but has not completely disappeared. We have received the next batch of pictures and it seems that the treatment is  working since the bump has almost disapeared. We will keep you posted! 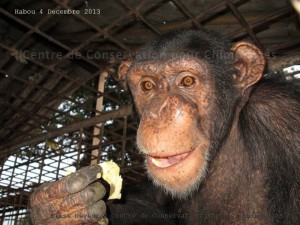