We want to wish Siala a very happy birthday; she turned five years old on Friday.

Siala was born on the 15th of March 2008 at the CCC. Her mum, Lola, is an orphan chimpanzee who was rescued from the illegal pet trade in 1996 by Estelle, the CCC director.

Siala’s birth was a total surprise for us as every mature female at the CCC is on contraception. We have a no breeding policy as we want to ensure we have room for orphan chimpanzees. But contraception does not always work! Lola was supposed to be released in June 2008 with the first group, but we didn’t want to put Siala’s young life at risk. A release is a stressful event and we feared that it would stop Lola from lactation, thus putting Siala’s life at risk.

So Siala spent safely the first 3 years of her life at the CCC and she grew up with a very strong personality! Lola and Siala were released in August 2011 with Annie and were integrated with the first released group. Lola was reunited with her friends Albert, Robert, Lottie, Mama and Nanou, her best friend. During their first year of freedom, Lola and Siala spent most of their time together in a nice part of the forest in the core release area. This year, however, they spent more time with the rest of the group. We think it is because Siala is now able to feed by herself and is more independent of her mother. Siala symbolises hope; albeit being born in captivity, she was raised by her mother and showed little interest in humans. She represents the second generation, a key for the success of our release program. We wish Siala a very happy and long life in the forest, we wish her to become a good mother to a first generation of wild born chimpanzees – our teams watch over her and her friends from a distance! 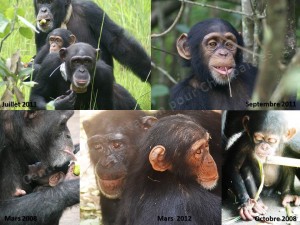