Coco is one of our most beloved chimps, and is an inspiring example of resilience in the face of extreme hardship.

Before his transfer to the Chimpanzee Conservation Center, Coco lived a long 14 years chained to a tree next to a hotel in the capital city of Conakry. While there, he regularly smoked cigarettes and drank beer for the pleasure of tourists.  In 1995, he successfully broke his chain and escaped but was severely wounded after being shot five times by a Guinean soldier. 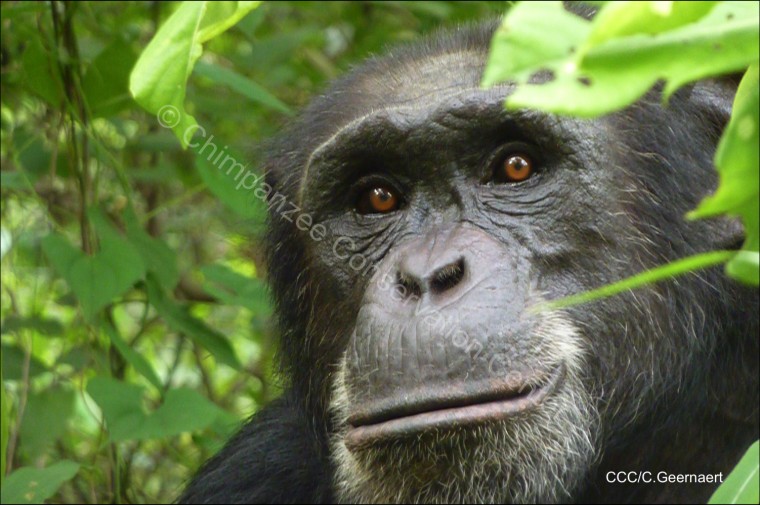 The Center’s Director, Estelle Raballand, intervened and was able to successfully treat him over the course of a few months.  Astoundingly, despite his incredible suffering, Coco accepted his treatments without aggression.  Unfortunately, one of the gunshots destroyed his right kneecap and his left leg has never recovered completely, leaving him disabled for life.  In 2011, Coco once again showed his incredible strength when he survived an attack from a swarm of bees which left more than 1,000 stings on his body.  While he was weakened for several months, treatment and copious amounts of attention from the volunteers helped pull him through.

Born in 1981, Coco was too old to integrate into the existing chimpanzee group – he never learned correct chimpanzee social behavior, and would have been further injured by his peers for his age and disabilities.  He lives alone but with much human interaction and enrichment.  Because he is not a candidate to be released into the wild, Coco holds a special place in each and every volunteer’s heart (sometimes gently nibbling on and kissing the volunteers).  He serves as a symbol of the resilience of this species even when faced with unspeakable cruelty.

Adopt Coco through our Adopt-A-Chimp program!