As every Sunday, meet one of the CCC chimpanzees. Today Missy’ story.
She arrived at the CCC in April 2014 when she was about 2 years old. An expatriate cared for her in Monrovia, the capital of Liberia. She had been kicked and bitten by a donkey and was in bad health. Her caretaker had found a place for her at a sanctuary in South Africa, Chimp Eden, but the Ebola outbreak started and Missy couldn’t go to South Africa anymore. In Liberia, her life was in danger since the population believed that primates gave Ebola to people. Although the CCC usually doesn’t accept non Guinean chimpanzees (there are plenty chimpanzees to rescue in Guinea alone) we made an exception since Liberia doesn’t have a sanctuary.
When Missy arrived she underwent a 21 days strict quarantine with two willing volunteers. Then she did her 3 months quarantine like any new comers. She was introduced to Sanka but couldn’t join the nursery group with her. She was too young. She didn’t stay alone very long and was soon joined by Noel and lately Hawa. The baby group goes on bush walks every morning and afternoon where they learn about their environment and basic social bounds. She is very close to Hawa (girl power!). She is calm and playful but she also knows her mind and she’s not afraid to let it knows. 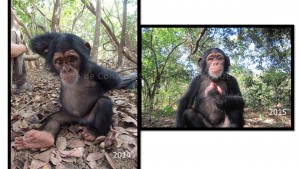