Today meet the third actor in our romcom saga. His name is Coco. He’s our oldest resident (about 36 years old), our own rock star and a real survivor! Coco was kept in captivity since he was 2 years old. He was chained by his neck in the back of a hotel in Conakry. One day in 1995 when he was about 14 years old, he broke his chain and a military shot him 5 times (4 bullets entered him from the back while he was fleeing). Estelle Raballand, the CCC founder was caring for chimpanzees at the time in Conakry. The hotel director called her. She managed to save him but he stayed paralyzed for 2 years due to a bullet in the back of his spine. One of knee was destroyed and it took years to heal. After years of efforts to find funding and get him back on his feet, he was moved to the CCC in 2000 (see picture of him and Estelle in 2002). 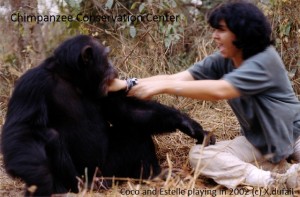 He had a few friends along the year, the latest is Zoe, but he could never be introduced to a group of chimpanzees due to his disability and his humanized personality. In 2012, we almost lost him again when he was stung over a thousand times by bees. 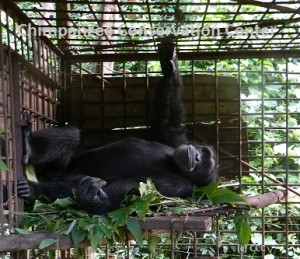 You can see him when he was lying on his bed very weak in the picture below. He has a very fragile stomach since then. He loves playing (see him laughing) and painting (on his face too). He loves attention, music, good food and his routine. Tomorrow Moucky move by Coco… He is interested (and worried)!You can sponsorhim on our web site: ttp://www.projetprimates.com/help-us/#Sponsor 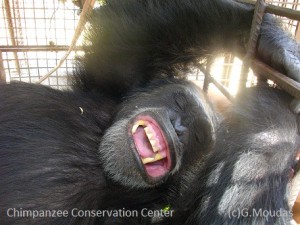 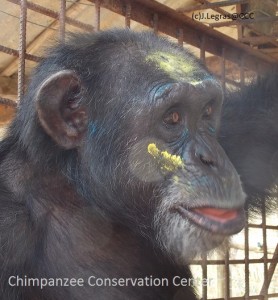