As promised, the latest news on the 50th orphan who’s arrived two days ago. Meet Sumba! That’s her new name. She’s less than a year old. As you can see on the pictures, she’s already a star. Her arrival was filmed by a french crew and photographed by Dan Kitwood from Getty who’s currently on site.
As usual with babies that young, a volunteer was chosen to become Sumba surrogate mom. Audrey, the lucky new mom, will spend night and days with Sumba for a few weeks/months. Sumba will be able to find love, care and safety in her arm. As you can see in the picture, Sumba is already settling in Audrey loving arms. Sumba is physically Ok as our vet Cristina found out apart from minor skin rashes but she will need time to overcome the psychological trauma of seeing her mother killed, being capture and kept in solitude, especially at such a young age.
If you too would like to become a surrogate mom, have at least 3 months to give, contact us: info@projectprimate.org 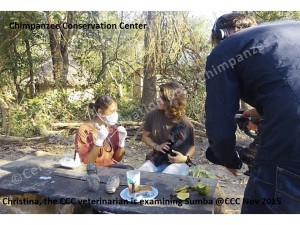 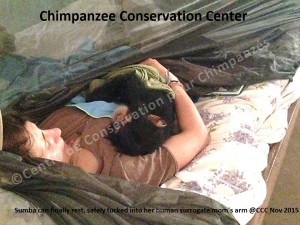