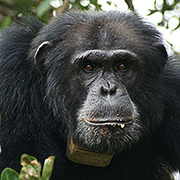 Albert was recovered by Ms. Raballand in late 1994 in Conakry when he was not yet 1 year old. He was kept as a pet, but without the proper care for a baby so young. When he has rescued, Albert was suffering from hypothermia. He quickly recovered, thanks to Ms. Raballand’s care and he soon found his place among the other orphanage survivors. During the summer of 1997, he was transferred to the CCC where he joined the juveniles group. Albert enjoyed many years of rehabilitation with his group, during which time they had daily trips into the forest. His group joined the adult group in late 2006 and Albert, although younger than other adult males, quickly became the leader of the group. Albert was released June 28, 2008, after being fitted with a VHF/GPS/ARGOS collar. The GPS collar records 7 location points per day. The points were then retransmitted at night by the Argos beacons. We retrieve the GPS points from a special website and track his movements from very far away! This is the first time such technology has actually been used on released primates. Albert quickly headed south of the Park with Rappa, then for unknown reasons, they separated in September 2008. In February 2009, a team from the CCC brought together Albert and Rappa in a beautiful mission into the bush. The reunion of the two friends was touching! The two males were then 25km south of the release site. We had installed a new camp to continue to follow them closely, but in May 2009 they were “repatriated” to the initial release site, where they were rejoined some of their friends. Albert has since become the dominant of the group, assisted by Robert. He manages his group very well, whose territory is now estimated to be around twenty km ². 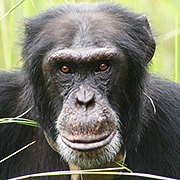 Robert lived as a pet to expatriates in Conakry for years. In March 1996, when he was about 9 years old, he was deposited, dying, outside Ms. Raballand’s door in Conakry. He had drunk (or he had been drinking …) a corrosive product that had burned his mouth and esophagus. He was in a catastrophic state. By pure caring and patience, Ms. Raballand managed to save him. After Robert regained strength, he was able to make contact with the other chimpanzees that Ms. Raballand was in charge of at the orphanage in Conakry. He was later transferred to the CCC, during the summer of 1997, where he joined a group of young adults. Robert was always a core member of the adult group; he was the dominant male for a while. He quickly showed us that he was a perfect candidate for release because he is a very smart male, extremely popular with males and females of the group. Robert was released June 28, 2008 with 11 other chimpanzees. Robert, like Albert, was equipped with a VHF/GPS/ARGOS collar. A few days later, he went alone to the east of the Park and found himself in the Mafou River in mid-August. We lost track of him at this time. A trespasser reported to us some time later that he saw Robert on the river bank. The trespasser had kept an eye on Robert until the CCC arrived and returned Robert, on foot, to the release site where he was very happy to be reunited with his friends! Today he is part of a group of eight released chimpanzees which are always tracked. He is well adapted to his new life of freedom! 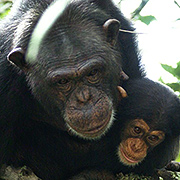 Lottie was part of the group of chimpanzees from the Bissikrima orphanage of Veterinarians Without Borders. She was transferred to the CCC during the summer of 1997. Lottie has always been female independent from her humans caretakers and showed a natural ease during outings in the bush with her group. August 14, 2000, Lottie gave birth to a baby male, Andrew. She rose to the occasion very well. The birth of Andrew, although unintended (CCC pubescent females are on contraceptive pills to prevent births, the CCC needs every bit of space available to accommodate orphaned chimpanzees) was beneficial for the whole group:  the other female observed Lottie raise her son and the males were very protective of him. His presence was a positive factor in group cohesiveness! On 28 June 2008, Lottie and Andrew, then aged 8 years and 19 years old respectively, were released together with the first CCC release group. They remained together for over four months in a remote area of the release site. CCC teams followed them from a distance tracking Lottie’s VHF collar. In November 2008, it was decided to return them both to the release site to rejoin the other chimps. Andrew was separated from the group shortly after their reunion. He was seen in July 2009, a few kilometers from the release site of, with other chimpanzees. We are hopeful he is still healthy because Andrew was “wild”, having been raised by his mother within the group. As for Lottie, she gave birth to a male infant in November 2009, that we named Jackson. Lottie took good care of him, but unfortunately Jackson disappeared in early 2012, after a suspected attack of baboons. Lottie has been highly suited to freedom and finding nourishment. 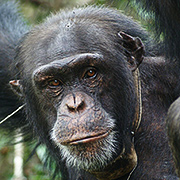 Mama was originally part of the same group as Lottie, who has always been her best friend. Mama is a very sweet female but has a strong character! Mama was released June 28, 2008 with her friends. She gave birth to a female in March 2010, but she unfortunately disappeared following an attack of baboons. Mama eventually recovered from this experience and again gave birth to Niamakoro, a baby girl in early 2012. 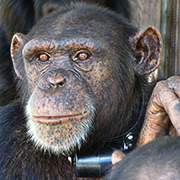 Nana was part of the group of orphaned chimpanzees from Veterinarians Without Borders. Nana was always female with an independent personality, with little appreciation for humans… She gave birth to a female June 29, 1999, Laurence. Nana took very good care of her daughter who also developed a strong character over the years! Nana and her daughter were released June 28, 2008 with their friends. Nana was fitted with a VHF collar; unfortunately she removed 5 minutes before the release! We lost track of her immediately, but she was believed to be seen in July 2009 with Andrew, Lottie’s son. We not worried about her chances of survival because Nana had all the environmental and social skills to survive. 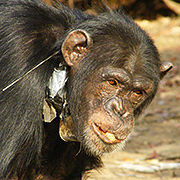 Nanou was rescued by Mrs. Raballand in Conakry. She was transferred to the CCC in the summer of 1997 where she was integrated into the juveniles group. Early on Zoe was dominated. But growing up, she gained confidence and always showed a very strong maternal instinct, always concerned the youngest of the group. Zoe was released on 28 June 2008. Just like Mama, she quickly settled on the release area and is now part of a group of chimpanzees that are always followed. She has not had a baby but we hope she will be a mom soon ! 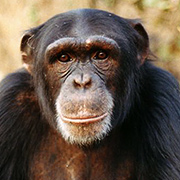 Zira, female, came from the orphanage of Veterinarians Without Borders. She was very discreetly the most “wild” chimpanzees, showing incredible ease in the forest. She was released June 28, 2008 and left the group to quickly inhabit a large forest area between the CCC and the release site. This area is known to accommodate a group of wild chimpanzees. Zira “turned” around this group and finally integrated. She has been seen several times in the company of wild chimpanzees. We wish her a beautiful life with her new family! 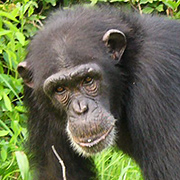 Orlando was Conakry was saved by Mrs. Raballand in Conakry. He had been chained to a bar, presumably to entertain clients. He had been abused, several of his toes had been chopped off… Orlando has retained a terrible resentment toward all human. After his transfer to the CCC in 1997, he remained part of the group of adults. He was one of the most dominate males but remained close to Robert, whom he knew from Conakry. Orlando was very popular with females in the group and as well as the group clown, always trying to lighten the mood with his antics! He was released June 28, 2008 with his friends. We lost track of him because he also removed his collar. He was seen with Andrew (and perhaps Nana) a year later. We hope he is still with his friends. 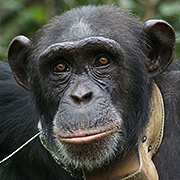 Lola was recovered in 1996 by the authorities in the city of Lola, in southern Guinea, and then entrusted to Ms. Raballand. She was transferred to the CCC in 1997 to be part of the youth group with her friends. Lola and Zoe were very close, and just like Zoe, Lola was dominated. She gained increasing confidence and her character became more assertive too!  She was very independent of humans during puberty, and quickly refused to take her pill… She became pregnant in late 2007 and gave birth to a female, Siala, March 15, 2008. Lola should have been part of the first release group, but the CCC team preferred to keep Lola and her daughter at the sanctuary: release would have been too stressful for Lola with her newborn daughter, and we did not want to risk losing them. Lola and Siala were therefore released together on August 4, 2011. They found their released friends from the 2008 group. They are both very well suited to the freedom and well integrated into the group. 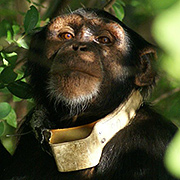 Annie was seized in Conakry by Guinean authorities in August 2007, and quickly entrusted to the CCC. Annie’s capture had to be fairly recent because Annie was in good condition and was pretty wild. She quickly integrated into the younger age group. She demonstrated to us the extent of her “chimpanzee knowledge” during outings in the bush: she already knew a lot of fruits, leaves to eat, but she also knew how to use tools to fish ants for example! Some chimpanzees have since also learned these difficult techniques! Annie was a great teacher! That is why it was decided to release her in August 2011 with Lola and Siala to rejoin the first group. Although she did not know the individuals from the first group, she was well received by Albert and Robert (who were delighted to have a new girlfriend!), the females of the group were a little less delighted … But she is still with the group today and extremely comfortable in her freedom!